Even if you were living in a cheap area, and only ate noodles, being able to provide for your family would still be a concern. Well, this is where one of our students found himself after graduating college.

He broke into a role that he knew wasn’t going to give him any job security or present him with realistic opportunities for growth. But, less than a year after going through our program he became a network engineer. Money is no longer a problem.

He didn’t have it easy. He had more challenges than you can imagine. Whether it was getting in an accident or losing his mother at a very young age, or witnessing his dad break his back to provide for him and his two brothers…

These experiences developed in him a character full of resiliency and determination. This, added to his innate ability to capitalize on his skills, enabled him to use the Zero to Engineer program to jumpstart his career and triple his salary within months.

The story of Chase Mitchell begins in a small ranching community of about 1,200 people in west Texas. There, kids dream of racing trucks and making them roar as loud as they can.

Chase shared these interests with other kids as he was growing up. But a life-threatening accident, which left him lying in a hospital bed for weeks, changed his aspirations. 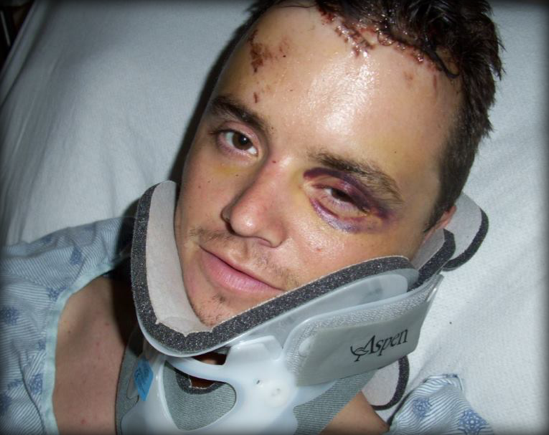 Chase Mitchell laying in a hospital bed after his motorcycle accident

“I had been laying down in the hospital bed for two weeks wondering what I was going to do with my life,” tells Chase, “when I noticed all the technology in the room, which was making my recovery that much easier.

I thought to myself: that’s what I want to do! I didn’t know anything about it but I knew I wanted to understand it.” Even before the accident, he had always been curious about technology. When he was growing up, he used to mess around with an Apple 2 computer and always tried to make sense of its technicalities as much as he could.

He liked it, but never felt he wanted to be a coder (a little ironic since he has been working on his network automation skills) and at that moment, he thought coding was the only option.

One of three siblings, he left the family tradition behind and went to college to pursue a career in tech. He chose Angelo State University. It was close to home –about an hour and a half away to be more precise.

Chase graduated in 2012 with a Bachelor’s in Management of Information Systems. He is very proud of having earned his degree, although he wishes he hadn’t gone to college. If he had run into Terry a few years earlier, he could have avoided wasting so much time. He would’ve avoided getting into $50,000 of debt—the only way he believed was the best way to break into IT.

Like many people, Chase graduated college full of ambition and motivation to succeed. But, he found himself doing basic things for someone with as much potential and passion as he had.

He landed a job working as a field director for a local candidate running for office. But that wasn’t going to cut it for him; it wasn’t what he had worked so hard for all those years.

He became displeased with the political environment and all the hypocrisy and manipulation that comes with it. Having learned that expecting job security in politics is borderline delusional, he quit. Yes, even after being part of a winning campaign.

He left the political sphere to pursue a career path that could offer many avenues for growth and job security in the long term. He landed an entry-level role working at the help desk for a mid-size company called eLoyalty in Austin, Texas. Nonetheless, he wasn’t quite sure about what to do from there and still wasn’t making enough.

Chase was now looking to leverage his knowledge of IT. He wanted to begin walking on a path to a fulfilling career full of amazing opportunities. But he struggled to gain relevant skills. He was practicing on outdated equipment, which he didn’t find out until later.

He knew technology moved very fast and it could be somewhat intimidating. But, he also knew that IT kept the doors of opportunity wide open for those looking to break into it.

Chase wanted to level up his networking skills and expand his industry perspective. But he was looking for something else. He was looking to learn more than technicalities and manuals. He wanted an experienced mentor who could guide him as he advanced in his career. A person who had already made all the mistakes there are to be made.

Someone who could tell him what to study and what to do to reach his goals. He was searching for a mentor who could point him in the right direction. He knew he had talent and great work ethic. It was a matter of knowing that he was working on the right things. He searched for weeks until he ran into a Zero to Engineer Facebook ad. The ad claimed that the training program could give him everything he had been looking for. He was curious and clicked on it.

He learned about Zero to Engineer around the same time he had decided he needed a solid career plan. He knew that without a good plan, moving up the industry and avoiding setbacks wasn’t going to be easy.

At the time he didn’t know much about the big picture of the industry, let alone planning for a successful career. But, he knew he needed guidance. Chase was considering starting a family soon. He knew he needed to set off on a path to a more lucrative position to make sure he was capable of providing for his loved ones.

Zero to Engineer was taught by Terry Kim, a former Air Force IT instructor and Cisco Systems Engineer who had run his own IT consulting firm. He had years and years of experience working in various areas of the industry.

Terry and Chase communicated constantly throughout the duration of the program. As his mentor, he made sure he was taking the exact steps to ramp up and achieve his goals as soon as possible.

Terry’s mentorship is what Chase valued the most from the Zero to Engineer program. Without it, he would not have been able to make it to where he is in such a short period of time, as he has said plenty of times. It often seems he doesn’t give himself any credit, but it’s his way of expressing his endless gratitude.

After he graduated from Zero to Engineer he remained at his current job as a service desk analyst making $32,000. This was an entry-level position. It wasn’t paying him anywhere close to what he aspired to earn before attempting to raise a family.

He was still in the same position as he was in his previous job. But there was one key difference now. He had a plan. His current position was going to enable him to gain essential hands-on experience. And now, he knew how to take advantage of it.

He remained patient. He knew this was the beginning of a career that could provide a stable future for him and his family. Chase spent a few more months at the help desk. Every day he helped with minor issues and did some repetitive work.

In the meantime, he studied for technical certifications in preparation for his career. He earned his certifications and kept his  professional online presence up-to-date. An IT and telecom management corporation called Tangoe Enterprises reached out to him and offered him a job.

He became one of their five network engineers. In this role, Chase provides support to all kinds of devices. But his main focus is on data center. With his team, he is working on updating switching from center row to top of rack and implementing an SDN approach to the WAN.

He is also learning how to automate the company’s network operations. Chase currently makes more than triple what he used to make before Zero to Engineer. He now works from home part of the week, which allows him to spend more time with his beautiful wife and his dogs.

Chase got exactly what he needed from the Zero to Engineer program. Which, at the time, focused on mentorship and career guidance. Since he graduated, the program has evolved into a complete course. It can now prepare people for a successful career even if they know nothing about IT.

Zero to Engineer is now offered on an online training platform called NexGenT. Here, students can interact with other students, mentors, and alumni. They can book one-on-one live mentor sessions. They can work in their own labs, and even carry out their own full-stack networking project.

Additionally, students have the opportunity to earn the title of Full Stack Network Associate by completing a virtual SQC, or skills qualification check. Chase was provided with preparation labs and lab guides that reinforce all the concepts and skills and he was tested on them with a live instructor to prove his new set of skills.

Who knows? In the future, Chase could become a NexGenT mentor and help other students achieve their goals. He is always looking to stay relevant by learning new things and staying on top of current trends; the perfect mindset to have in an industry that seems to change every day. In fact, he recently earned his AWS certification. So, it wouldn’t surprise us if the next time we hear from Chase, he is a senior network engineer at one of the world’s tech giants.