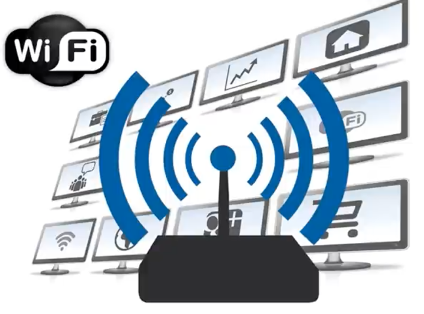 What are traditional wired networks?

In the above diagram we have a common local area network. This is the type of network that’s at your house. In this particular diagram we have a house computer that’s wired into a hardwired switch that’s wired into a router which provides access to the Internet. This describes the wiring at work that would just be like at your home. We need to understand that first. Again, here we have our host wired into the network. And that’s your common local area network or LAN.

Other information that we should know about wireless networks and wireless Access Points. We should know that all wireless stuff and wireless Local Area Networks fall under the standard 802.11. That’s IEEE 802.11. And surely, you’ve probably read or seen or heard this term before. We have many different flavors of 802.11. We have a, b, g, n, and AC. These letters represent different forms of 802.11 standard and they represent different speeds, different bandwidths, and different data rates. We’re not going to dive into all those, I just want you to understand what they generally are.

You can then control all of those from a single location or a single server. Control-based AP’s are designed to connect to that kind of server. The last type of wireless AP is the one mentioned earlier and that’s like a router with a built-in access point. The router at your house that provides you with internet access is likely one that you can get from Walmart, or Best Buy and get something like a D-Link router, a Linksys router, or a Netgear. Usually, it’s a router that has built-in wireless access and really a triple combo device. They’ll have a router or a switch, and wireless access point all built into the same device.

Now you should have a great understanding of what wireless access points are. They’re huge for network engineers and a huge topic in networking. As a Full Stack Network Engineer, this is one of the things you’re going to need to know how to configure and set up.