On the evening of December 15th, we gathered for our virtual graduation ceremony to celebrate the recent success of our Full Stack Network Engineer 6-19-2020 cohort. This was truly an exciting moment for everyone as the cohort members completed the Full Stack Network Engineer (FSNE) program having put in their passion and hard work over 22 weeks to achieve success. The cohort began on June 19th, 2020, and completed with 66 graduates.

Through the program, students learned exactly what it takes to be an effective and successful Network Engineer in today’s workforce. Having most students starting out with no prior experience, their knowledge was built from ground zero where they learned the fundamentals of networking and progressed all the way to planning, designing, and deploying their own multi-site, enterprise-grade networks by the end of the program. The students from this cohort are now in the job hunting phase. Some of which have already landed new IT jobs or landed promotions within their companies.

The FSNE program prepares students for the real-world by rigorously vetting their skills and knowledge over 22 weeks and across multiple checkpoints and milestones which include multiple awards. The first award that students must achieve is the Full Stack Network Associate (FSNA) award from NexGenT. To achieve this students must pass a written exam and also deploy a real network on their own which supports routing, switching, wireless networking, voice over IP, and network security. After achieving the FSNA, students then work on obtaining their Cisco Certified Network Associate (CCNA) certification from Cisco Systems. The goal is for the students to knock out this certification by the 90-day mark before moving into the advanced training aspect of the program. Upon entering advanced training, students immediately begin learning project management skills and working to design and build their first project. Their first project is a very robust 3-site network deployment with a headquarters and two remote offices. Two more projects are then deployed where a Cisco ASA with remote access SSL VPN solution is deployed, followed by a Colo Data Center deployment for redundancy and additional network services.

After planning, designing, implementing, supporting, and finally closing all three of these projects, the student must pass their final skills qualification and troubleshooting check, in order to achieve their Full Stack Network Professional (FSNP) from NexGenT. Throughout the program students also receive career help and have many career-related milestones to accomplish relating to their career plan, resume, and personal branding. After completing all program milestones and capstone projects, the students then move to the job hunting phase where they focus strictly on landing their new job or promotion.

There are currently three other cohorts running who will soon be graduating and celebrating similar success, and our next FSNE cohort launches in February 2021, only a few days from now! To learn more about getting on the path to become a network or systems engineer with robust training, project-based learning, career planning, and real-world skills awards with zero upfront costs, then click here.

Additionally, six special recognition awards we handed out to recognize top performers, most improved, and first to get certified.

Winners of the six Recognition Awards:

Join us in congratulating all of the graduates of the 6-19 cohort! 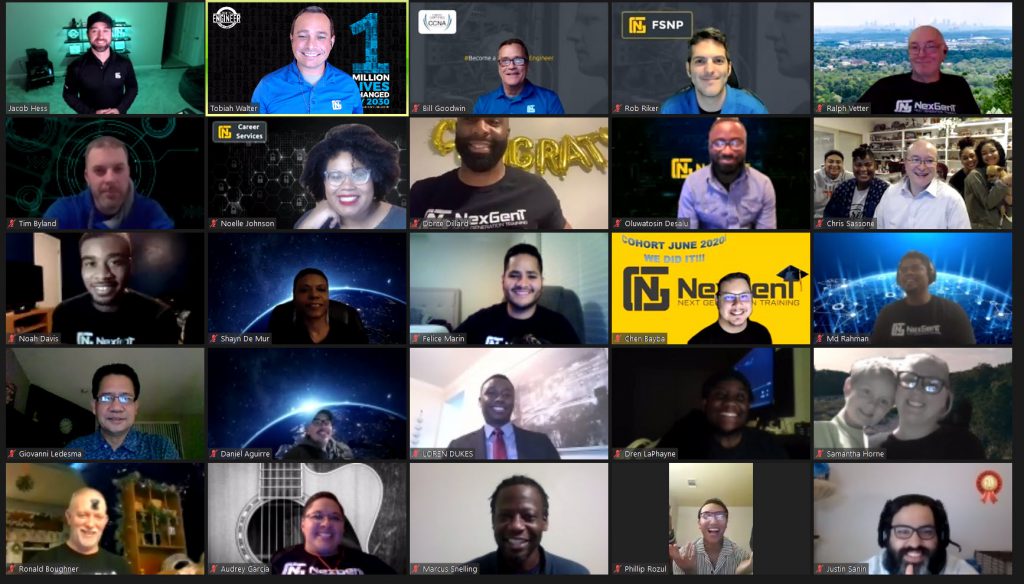