Want To Get The Coolest Job At Cisco? It’s All About Hands On Experience

You wanna know what the coolest job at Cisco is? Take a guess…

It’s not the VP of sales, or the head of systems engineering, nor it is the CTO. Heck, it’s not even the CEO!

Side note: Chuck Robbins is definitely really cool. We met him the other day: 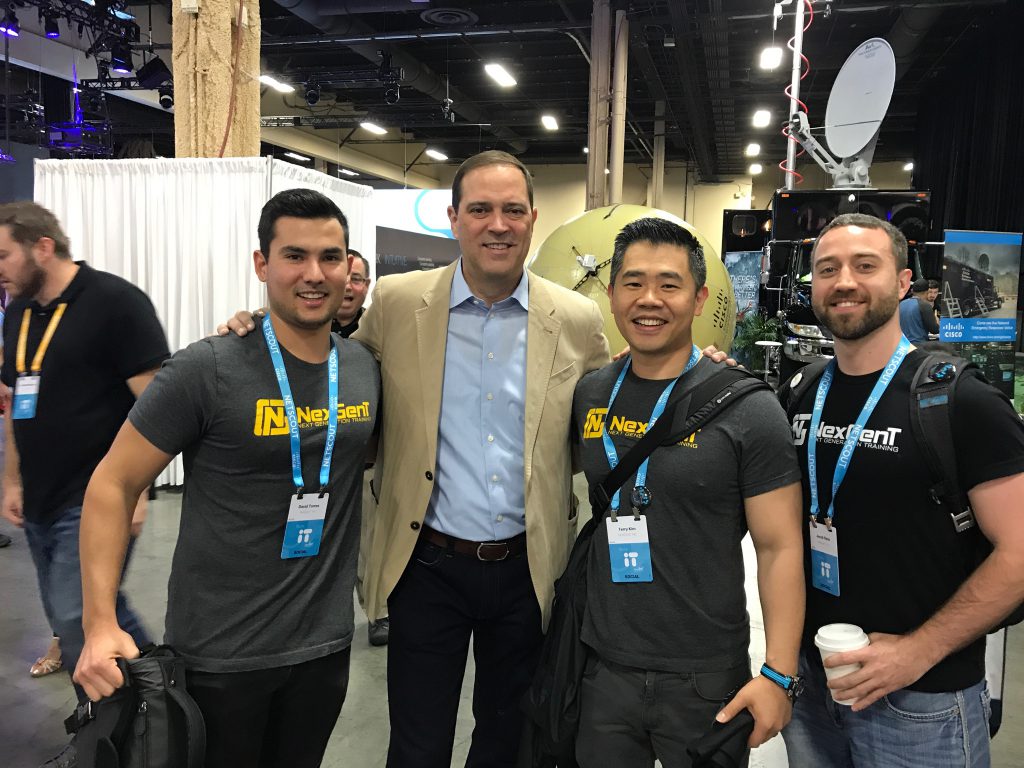 The coolest job at Cisco involves helping people in areas that have just been hit by a natural disaster.

Imagine if you had relatives living in New Orleans in 2005, when hurricane Katrina hit. How worried would you be if you couldn’t get a hold of them?

What would’ve been going through your mind as you sat in front of the TV looking at aerial images and listening to reporters talk about the number of missing people?

Whenever something happens, Cisco sends its tactical operations team –a team of badass first responders who have tons of hands on experience– to restore communications after a tornado, earthquake, hurricane or even tsunami hits.

The tactical operations team travels in a truck called the NERV (network emergency response vehicle), which is equipped with the necessary technology to get things up and running wherever it goes. It’s basically a network on wheels.

In an emergency situation, field communications must be mobile and easy to deploy. Hence, the NERV was built to be fully operational in under 20 minutes, be shut down in less than 15 minutes (in case it’s needed in a different location), and it can power its own systems by using an on-board generator.

But, even though the NERV is pretty damn cool, the real heros here are the highly-skilled members of the tactical operations team, and here’s a good illustration of why: when communications are needed in places where the NERV can’t travel to fast enough, the tactical operations team uses mobile kits to set up wired, wireless, data, voice and satellite communications.

Sometimes they even camp out at the disaster area for days just to make sure that hospitals, fire departments, police, etc. have proper connectivity to carry on with their operations and that people can communicate with their loved ones. This is hands down the coolest job at Cisco!

In this exclusive NexGenT interview, Chandler Johnson, a member of the tactical operations team who has helped restore communications all over the world, walks us through the NERV vehicle and gives us an insight into what his job is like, as well as valuable career advice:

If you watched the video, you should’ve noticed that Chandler gave some key career advice for people who want a successful tech career. Among what he recommends is getting familiar with the full stack of networking technologies and learning automation.

The reason for the first one is quite clear: networks are not just routers and switches anymore. They consist of a broad range of technologies that must be integrated together in a precise way for things to operate smoothly. If you still think that companies will keep hiring people to focus on each particular area of IT, you’re dead wrong! Companies are in need of full stack network engineers because it helps them save money and streamline operations.

More on that topic here

The reason for Chandler’s second recommendation is quite obvious too: automation makes everything simpler. Anyone who wants to have a successful career in tech needs to learn how to at least automate routine and repetitive tasks. Why is it important? In the case of the NERV, as you saw in the video, automation enables volunteers to easily contribute to restoring communications without having to be highly-skilled experts. It has a similar effect in companies…

Here’s another question for you:

Do you think Chandler, or any other member of the tactical operations team, would have any problem landing a “normal” tech job? I don’t think so. These people have so much hands on experience that any company would be lucky to have them on their teams.

Related: Secrets to obtaining 6 figure job offers from top tech companies within 2-4 years even if you have zero experience today!

If you paid close attention to the video, you should’ve noticed that at one point Chandler said “I had to learn a lot on the job” and “I actually didn’t have any formal training before I came on the team.” The members of the tactical operations team have to manage a lot of the technologies in the full stack of networking. There is no way someone could actually learn all of these technologies through conventional education methods.

Sure, you’ll get to know about them and maybe even understand them. But, the only way you can be certain that you have truly learned them would be by building something real. By actually getting something done! This is why companies care so much about hands on experience! Even if you’re just getting it through these tactics.

If you understand that hands on experience is what truly matters in the IT world, and you think you have what it takes to succeed in IT, try to get into the Zero to Engineer career blueprint program. You’ll learn the full stack of networking technologies (everything from routing and switching to automation and VoIP), how to carry out your own full stack networking projects from scratch, and how to land your dream IT job in record time.

The sole goal of Zero to Engineer is to give you the exact skills you need to skyrocket through the industry using a method similar to military training (in fact, the creators of the program graduated over 1,000 engineers while they served as IT instructors at the Air Force), where the only purpose is to get you ready to perform in the field, not to give you a piece of paper with fancy words on it that, in reality, means nothing and could leave you wondering if you’re ready to add value to companies.

Chandler and his team don’t have to worry about getting hands on experience, they already have the coolest job at Cisco. But, most people are not that lucky. Especially for those starting out, getting hands on experience can be a major challenge. Yet, it seems that regardless of how many titles and certifications someone has, most companies expect people to have some.

Related: how to use LinkedIn to get technical recruiters to offer you interviews

You can choose to keep going in circles, chasing cert after cert like if they were some golden ticket to the top (they do help, true. But, they aren’t the answer). Or, you can pull your head out of your ass, follow Chandler’s and NexGenT’s advice, and get started on your path to becoming a full stack network engineer. Not by passing written exams. But, by getting your hands dirty with real world equipment, and getting mentored by some of the best engineers in the world.

Who knows? Maybe Chandler and others in the tactical operations team will become mentors in the NexGenT platform one day…

You can apply to Zero to Engineer here