Demetrisse Harris took a chance on NexGenT and found a family. He is currently one month in as Field Support Rep for Gazion Technologies and loving the experience.

Let’s rewind: Demetrisse was running an errand for his other full-time job at that time and decided to study NexGenT content on his laptop, while he was waiting. A man passing by was intrigued by the clip he overheard—our lesson going over spanning tree protocol—and asked what he was watching.

The man was impressed at how far along Harris was for only studying a few months and quizzed him on basic IT questions and identifications. At the end of their conversation, the man looked at Harris with a sharp eye. “Are you willing to start working part-time, right now?” The man continued, “I’d like you to do a ride-along with me and see if you like it.” Demetrisse raised an eyebrow and pursued more information, from which he learned he was speaking with the owner of the company Demetrisse would be working for if he accepted his offer. Flabbergasted, Demetrisse pressed into the conversation to hear more.

Gazino lamented his wishes that NexGenT was around when he was in school to Demetrisse, saying how it would have saved him $80,000 in debt, out of which he suggests only gaining only $2,000 worth of IT education. Unreal, but a sad reality for many and a problem in our broken education system that NexGenT aims to solve. 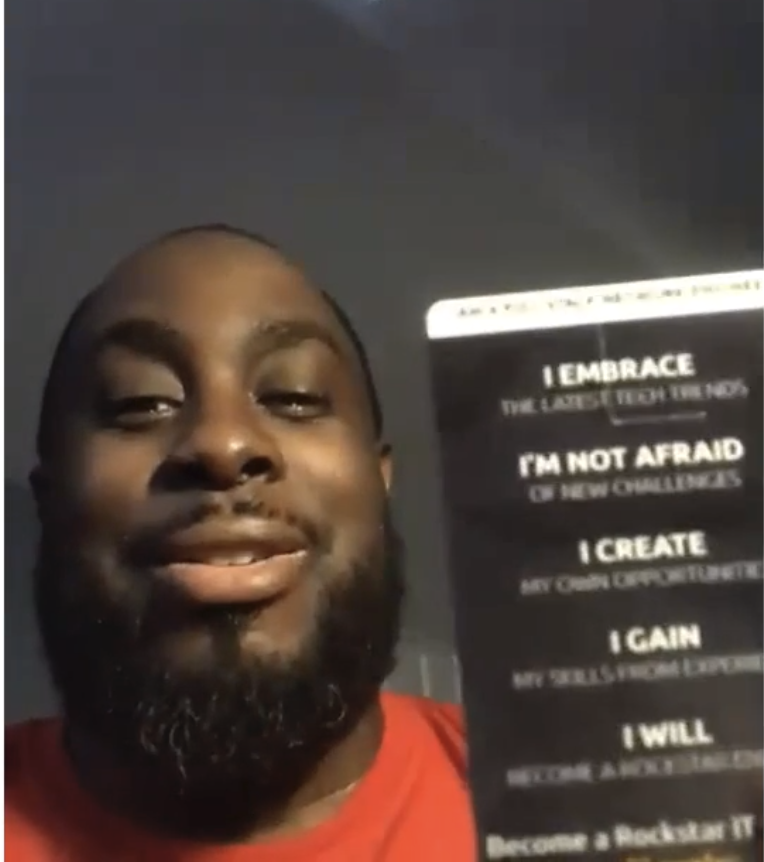 “This card they gave me – I live by this card”

Demetrisse tells us, “Almost every day I run into someone in IT who wants to help me out and give me advice. I feel like I hit a lucky streak just by signing up for the program.”

One of the main draws of NexGenT for Harris was the live interaction between the student and the instructors. He has come to love the online community of NexGenT and how he has somewhere and someone to turn with questions with a virtual program.

We value real connections with our students—there’s no substitution for high-touch interaction when learning new skills.

“I’ve totally bought into the program, I’m at the point where as soon as I finish this, and if another class opens up, I’m taking that one too. I’m that invested in it already.” Demetrisse was first drawn into IT when he was running a music studio, where he had to learn how to configure everything by himself and he enjoyed the process.

At that same time he was working as a sales manager in retail and it struck him one day that he no longer enjoyed what he was doing. He said to himself, “I need to go back to school to do something I love.” With that mindset, he started digging around into different IT programs and landed on NexGenT.

Demetrisse was enticed by the program focusing on the right curriculum and leaving out all the fluf – really getting into the nitty gritty and job-ready skills. “I love that [while going through a lesson] you’re not sitting down for 2 hours to get one point across. It makes it easier to backtrack, to learn, to write my notes.” — We keep the lessons inside the modules between 15-45 minutes with few extending past that. That way you can take breaks, students can keep focused, and track topics easier.

Demetrisse’s tip for taking things to the next level: If you want an extra hands-on experience instead of only Cisco Packet Tracer, you’ll want to find equipment that will serve you. It could cost as low as $300, and that gets you the hands-on practice that will give you the confidence and the upper-hand when starting your job search and interviews.

“I don’t feel like I’m trying to be sold into another program that may work. I’m being in a program that is going to work and already is.” He beamed, “I knew enough for a guy from a company to say hey, let me take you on, and I’m only a month in. I don’t think that would have happened if I was with any other program.”

It’s amazing what a community can provide to those who dare to step into a new direction. Demetrisse is filled with hope for the future, and he has found a true family while in pursuit of his goals.

“Thanks to NexGenT, I know I’m going to be successful. . .Answering that email has been the best decision that I’ve made in a long time.”

We are beyond grateful to have Demetrisse as a part of the NexGenT family! We’d love it if you joined us, too.